I know, I know, you didn’t put any money down. SO THAT MEANS YOU OWE ME!

The Menstrual Cycle: Seriously, Be In the Know

On average, a woman will spend approximately 50,000 hours menstruating. If it’s true that 10,000 hours of practice can make you an expert at something, then we should have a fair amount of people on this planet who have been relegated to the status of genius on the subject.

Sadly, this isn’t the case.

Despite the “information age” and great medical advancements menstruation is still shrouded in mystery and myth, even among women. Crappy societal attitudes towards menstruation have altered women’s perceptions of their own cycles. In fact, menstruation is still sometimes considered shameful and dirty. Menstrual blood has even been perceived as especially dangerous to men’s power.**

So let us gleefully put that spotty history behind us (though let us not forget it) and spend some time examining the fluid genius of menstruation, and of those who menstruate/have menstruated. And if you want to be EXTRA AWESOME you should learn about the menstrual cycle according to Traditional Chinese Medicine – it’s more a story than a graph, so it’s easier to remember and more enjoyable to learn. I mean, who doesn’t love a good story? And a story with complex female protagonists, subtle transitions, and lots of blood??! COUNT ME IN!

**There are some moments in history in which we can observe a reverence for menstruation; unfortunately, it’s not as common as our history of regarding menstruation as witchy and weird.

Estrogen and progesterone are the two best known sex hormones involved in the menstrual cycle. How much or how little of each hormone is made at any one time relies on a complicated feedback system between the brain, the ovaries, and the adrenal glands. In very simplistic terms: Estrogen stimulates tissue growth, and progesterone signals the body to slough it off.

During a normal menstrual cycle, estrogen and progesterone take turns driving the process of maturing and releasing an egg and preparing the uterus for possible pregnancy. Estrogen spikes in the first half of the cycle, peaks at ovulation, then falls in the second half as progesterone rises. Progesterone is released by the rupturing of the follicle and the release of an egg during ovulation. If there is no pregnancy, you have a period and the whole cycle begins again.

*Note: The menstrual cycle involves other major hormones, including testosterone, luteinizing hormone (LH), and follicle stimulating hormone (FSH), but for the sake of this post, we’re stickin’ with the Queenpins. See more about these other hormones in The Menstrual Cycle According to Biomedicine. 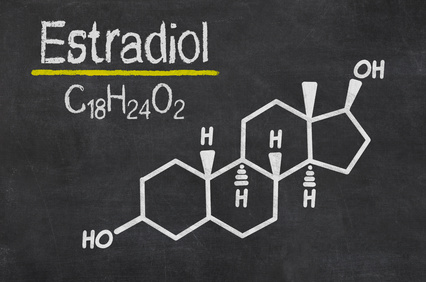 “Estrogens” are actually three different compounds, and include estrone (predominant in menopause), estradiol (predominant in non-pregnant females), and estriol (predominant in pregnancy). Estradiol is present in both men and women – so next time some dude refers to your knitting circle as an “estrogen party” you can invite him to join since he belongs too. Same goes for testosterone. My thoughts? There should be a ban on all hormonally-exclusive parties because they’re stupid and inaccurate.

Since most people use the word ‘estrogen’ generically, and don’t differentiate between these three different compounds, you can safely assume that if someone drops the E-bomb, they’re usually referring to estradiol.

Estradiol is famous for its role in the development of secondary sexual characteristics – think of estradiol as an incredibly prolific builder named Babette. She builds boobs, increases fat stores, thickens the uterine lining, increases vaginal lubrication, increases bone formation, assists in blood coagulation, and helps boost sexual desire. Whenever you witness sex in all of its glory on somewhere like https://www.hdpornvideo.xxx/?hl=es, you can be assured that Babette is hard at work wherever you look. She’s busy as a bee, that Babette. In fact, if I was as prolific as Babette, this blog post would have been finished and posted by the time I was 13.

In Traditional Chinese Medicine, estrogen is considered a yin hormone. The word ‘yin’ is associated with form, substance, growth and blood. In basic terms, yin is the water that opposes the fire of yang. During menopause, estrogen levels decrease. Since estrogen is a yin hormone – and acts in nourishing and cooling ways – we can see why a deficiency of yin produces hot and dry symptoms such as hot flashes, night sweats, vaginal dryness, and bone thinning. In Traditional Chinese Medicine, menopause involves what is called “Yin Deficiency.”

On the flip side, an excess of Yin produces cold and wet symptoms, such as weight gain, fatigue, and infertility (similar to symptoms we see in PCOS, when estrogen levels are often higher, and with the symptoms of “estrogen dominance”).

Progesterone is considered a yang hormone, as opposed to yin. Though progesterone is tots famous as the ‘pregnancy’ hormone, you can also think of it as the counterbalancing hormone to estrogen – the yang to estrogen’s yin. The word “yang” is associated with function, warmth, transformation, and change – it’s a concept very concerned with function and less concerned about form.

Progesterone definitely wears a power suit to work, and can walk on a cobblestone street in 2 inch heels without wobbling. I’m sure of it. Let’s call her Portia.

Portia efficiently moves through the body and keeps stuff a-movin.’ As the Director of the Office of Long-Term Planning and Sustainability, she’s in charge of everything from climate change and adaptation, energy supply, building efficiency, transportation, and waste. In other words, Portia can enhance thyroid function, enhance fat metabolism, improve circulation, and help distribute fluids. She can increases your core temperature during ovulation, reduce spasm and relax smooth muscle, and can help prevent endometrial cancer (involving the uterine lining) by regulating the estrogen’s tendency to build and build and build without regulation. Simply put, estrogen stimulates tissue growth, and progesterone signals the body when it’s time to slough it off.

Slightly off the subject, but very interesting to note – I see a decent amount of women in the clinic who report that their complusive/addictive behavior is greatly affected by their cycle. And since progesterone/estrogen levels can enhances the function of serotonin receptors in the brain, it would make sense that a deficit or excess of these hormones have the potential to result in significant neurochemical issues. This provides one theory for why some people resort to substances that enhance serotonin activity such as nicotine, alcohol, and food when their progesterone/estrogen levels are not at optimal levels.

*Note: Progesterone’s functions are quite different during pregnancy, but that’s a post for another time.

In Sum: You Want Babette and Portia to Tango Without Fighting

If you are ever unsure of your relationship with someone, try tango lessons. It’s very telling. 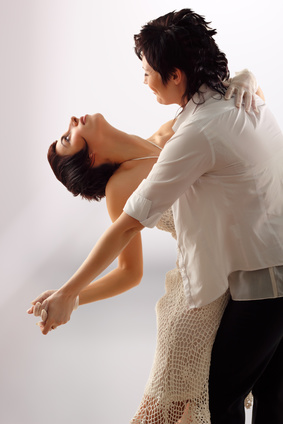 The body’s ability to warm/cool and create/move signifies a balance of yin and yang, and is inextricably tied to hormonal flux. During a lifetime, it should be expected that a woman will occasionally experience periods of imbalances in yin/yang. If they don’t, they’re probably a Cylon.