This is part two of a series on treating pain naturally. If you haven’t read the first post, see here.

Below are some common supplements for decreasing inflammation. While two of these are herbs that can be found in the spice rack, in order to get the anti-inflammatory benefits, taking a concentrated dose in capsule form is recommended.

Using single herbs in high concentrations is more in line with Western herbalism than Traditional Chinese herbalism. If you’d like to use products backed by medical studies to help you manage your pain, you may want to head to the peaCURE website to get started learning about palmitoylethanolamide and what it could do for your health. TCM is rarely backed by such studies but you may want to try them nonetheless based on the results experienced by others. Taking high doses of single herbs is not common to TCM; herbal formulas are constructed according to the kind of pain (including location) and take into consideration the patient’s underlying constitution, and there are usually multiple herbs in a formula. I wrote this post on single herbs because my patients are often more familiar with Western herbalism. Many report that the following supplements have been effective for mitigating pain,
especially when taken consistently and over time. While we’re on the topic of herbs that can help with pain relief, something that I would like to give a favourable mention to is the use of CBD oil. I know a few people who have used this to help manage their pains and they have said it has made such a difference. Seeing as you can buy CBD Online, if this is something you think is worth trying, be sure to do some research beforehand. It pays to do the looking before you decide to go with a particular dispensary as there are some who are selling illegitimate products, and then there are some who pride themselves on quality (such as www.thecbdepotshop.com). Knowing what to look for helps you decide where to buy from.

Turmeric comes from the root of the Curcuma longa plant. It has tough brown skin and bright orange flesh. Traditionally used as a pain-relieving herb in both Ayurvedic and Traditional Chinese Medicine, much of the recent research on turmeric has confirmed it’s anti-inflammatory effects. To look for products that contain turmeric, you could have a look at supplements from sites similar to Sculpt Nation and others that can help you fight muscle fatigue and pain, as well as having anti-inflammatory properties.

The volatile oil fraction of turmeric has demonstrated significant anti-inflammatory activity in a variety of experimental models. Even more potent than its volatile oil is the yellow or orange pigment of turmeric, which is called curcumin. Curcumin is thought to be the primary pharmacological agent in turmeric. In numerous studies, curcumin’s anti-inflammatory effects have been shown to be comparable to the potent drugs hydrocortisone and phenylbutazone as well as over-the-counter anti-inflammatory agents such as Motrin. Unlike the drugs, which are associated with significant toxic effects (ulcer formation, decreased white blood cell count, intestinal bleeding), curcumin produces no toxicity. – from WHFoods.com

Curcumin is also a powerful antioxidant. It helps fight oxidative damage and boosts the body’s own antioxidant enzymes. For more about turmeric, including research, see here.

Dosage: The daily dosage is 400-600mg of encapsulated extracts, three times per day (or as directed on label of product). Whole turmeric and isolated curcumin products are available (I prefer whole turmeric that is standardized for 95% curcuminoids.)

Neither curcumin nor turmeric taken orally is well absorbed unless taken with black pepper or piperine, a constituent of black pepper responsible for its pungency. When shopping for supplements, make sure that the one you choose contains black pepper extract or piperine. (If you’re cooking with turmeric, be sure to add some black pepper to the food.). Be patient when taking turmeric supplements: the full benefits may not be apparent for eight weeks. -Dr. Andrew Weil

Potential side effects: Rare. Occasional stomach upset or heartburn if used over time. Not to be used with blood-thinning drugs, like warfarin or coumadin. Questions exist around whether turmeric/curcumin is appropriate for those with gallstones or bile duct dysfunction, though curcumin can increase bile solubility. If you are pregnant, consult with your doctor before using turmeric.
Note: If you are taking turmeric with piperine, please note that piperine can slow the elimination of some prescription drugs including phenytoin (Dilantin), propranolol (Inderal), and theophylline. Some evidence also suggests that curcumin can interfere with a chemotherapy agent used to treat breast cancer, so discuss the with your physician if you are currently in treatment.

Traditional Chinese Medicine: TCM has long included turmeric in its pharmacopeia. Curcuma longa, referred to as jiang huang, is considered warming and blood vitalizing. It’s used to eliminate blood stasis, promote the flow of qi, and relieve pain. For you herbalists out there, take note: jiang huang should not be confused with yu jin or e zhu.

Zingiber officinale, or ginger, is a flowering plant in the family Zingiberaceae whose rhizome (underground root) is widely used as a spice and a medicine.

Ginger contains very potent anti-inflammatory compounds called gingerols. These substances are believed to explain why so many people with osteoarthritis or rheumatoid arthritis experience reductions in their pain levels and improvements in their mobility when they consume ginger regularly. In two clinical studies involving patients who responded to conventional drugs and those who didn’t, physicians found that 75% of arthritis patients and 100% of patients with muscular discomfort experienced relief of pain and/or swelling. –from WHFoods.com

Dosage: 500 mg one to three times daisly, standardized to 5% gingerol content. Some take up to 3 grams of ginger (total) per day.

Potential side effects: Rare, but include heartburn and digestive upset. Avoid taking ginger if you have gallstones or if you are on a blood thinner, like warfarin or coumadin. 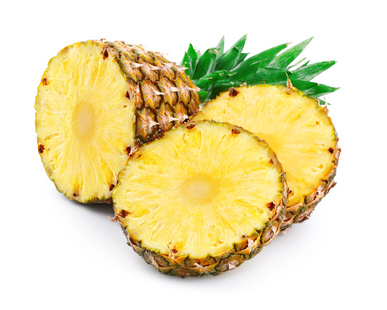 Okay, it’s not technically an herb, but it’s effective at reducing inflammation and it comes from a common food. Derived from the stem of the pineapple plant, bromelain is a proteolytic enzyme (capable of digesting protein) that is absorbed from the GI tract and is able to promote healing of tissue injuries.

Most often used for sprains and strains, bruises and hematomas, wound healing. (Some research shows that it works well for sinusitis, too).

If you’re curious about the research on bromelain, see here.

Dosage: Look for bromelain that is enteric-coated. The coating prevents bromelain from being destroyed by gastric juices, and assures it anti-inflammatory properties rather than simply working as a digestive enzyme.

The dose is 200 to 400 milligrams three times a day, taken on an empty stomach (at least ninety minutes before or three hours after eating). Bromelain is measured in MCUs (milk clotting units) or GDUs (gelatin dissolving units). One GDU equals approximately 1.5 MCU. Strong products contain at least 2,000 MCU (1,200–1,333 GDU) per gram (1,000 mg).

Potential Side Effects: Bromelain is generally safe and free of side effects when taken in moderate amounts. Some people are allergic to bromelain (if you’re allergic to pineapple, don’t take bromelain). Because bromelain acts as a blood thinner and little is known about how bromelain interacts with blood-thinning drugs, people should avoid combining such drugs with bromelain in order to reduce the theoretical risk of excessive bleeding.

Lastly, consider Traditional Chinese herbs for treating pain. See your local acupuncturist for a formula suited to your specific needs.