It’s late June, and it’s a hot summer day in Maine. Since you have the whole day to yourself, you decide to drive to the coast. You grab some snacks and your iPod, hop into your car, unroll the windows, and blast Janelle Monáe’s Electric Lady. Along Rt. 1, fields of pink and purple lupine line the roadside. For lunch, a soft shelled lobster, an ear of sweet corn, and sun tea; then, an afternoon hike through Wolfe’s Neck State Park, a two hour paddle in Casco Bay, and a dish of frozen custard as dusk falls. As the sun sets and the sky darkens, you head home with the windows down, the smell of beach rose and sea water heavy in the air. Later that night, back in the city, the simultaneously haunting and peaceful sound of peepers drift through your open window, a nightlong testament to the bewitching magic of summer and the world’s most effective tonic for sleep.

Summer is the season of warmth and bounty and laughter, a long-awaited reward for Mainers who brave long winters and do their best to fight off the deep chill that threatens to douse the spirit. Spring seems tardy in its arrival, but always arrives in the nick of time. Just when Mainers begin throwing their hands up in surrender to the eternal gray freeze, the earth heaves and the thaw begins.

Then, daffodils! Boiled sap! Asparagus and arugula! Fiddleheads!  Seed swaps! And my all time favorite spring phenomenon – kids in shorts and flip flops regardless of the fact that the temperature hadn’t broken 50, their awkward winter legs a droll reminder that summer will come. Eventually.

Then, finally, the burning yellow fireball appears in the sky igniting spirits with warmth and joy. Mainers begin showing their teeth in the form of a smile. They begin interacting with their neighbors, rolling out grills and yanking lawn chairs from the shed. The smell of charcoal smokers and freshly cut grass fills the neighborhood. Cardinal’s whistle in the sunrise. Light streams through the kitchen window as if it’s always been warm and wonderful and people fall madly in love with the smell of the air, forgetting that out that very same window once loomed an unbearable pile of gray snow.

Summer: The Element of Fire 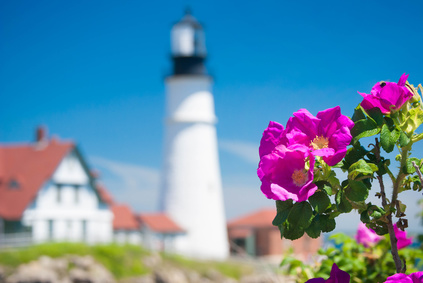 A typical summer day in Maine is a perfect metaphor for explaining how Traditional Chinese Medicine conceptualizes the fire element, which is associated with the season of summer and the organ of the heart. Summer is the best time to cultivate yang energy – activity, growth, and creativity are at their peak. In general, less sleep is required, more fresh uncooked food can be consumed, and more liquid is needed to balance the spike in heat.  In the warmer weather, the chest opens and the muscles relax more easily. People naturally feel more playful and adventurous.

The emotion associated with the element of fire is joy. This includes the concept of overjoy, which implies excessive excitement. Often, this is a difficult concept for some people at first – too much joy is a thing?

Yes. It is. Here’s an example: Party hardy for a 10 days straight, then consider how depleted you’d feel by the end of that week. That’s overjoy. Admittedly, some of us no longer party hardy, or never did for that matter. Consider overjoy as the part of American culture that encourages us to live fast and furiously – to consume, work hard, play hard, and then to do it all over again. You know, the whole “don’t sleep ’til your dead” mentality.  If you don’t get what I’m talking about, rent The Wolf of Wall Street for an extreme example of ‘overjoy.’

Lastly, consider this sobering fact, from the CDC: About 600,000 people die of heart disease in the United States every year–that’s 1 in every 4 deaths.  A doctor of Traditional Chinese Medicine might make a correlation between this high mortality rate and a culture that fosters high stress, competitiveness, and consumption – all which could be seen as various forms of overjoy.

According to Traditional Chinese Medicine (TCM), summer is the season in which yang is at its peak. Just as the sun provides warmth and light for all living things, the organ of the heart is said to illuminate the body with consciousness, spirit, and feeling (called ‘shen’). In other words, the concept of ‘shen’ is similar to the Western concept of “mind.”

A balanced fire/shen is evident through the brightness of the eyes and the clarity of speech. A person with a strong heart is comfortable in their skin; they are able to adequately express their needs and ask for help in a direct way. Though they aren’t falsely chipper or overly-positive, they can deal with the complex range of emotions without becoming ungrounded.  The balanced heart, according to TCM, also implies a strong memory, a love of laughter, and a naturally warm demeanor.

Imbalances in the Heart: Dying Flames and Sudden Flares

The essential characteristics of imbalances within the heart involve unstable mental-emotional states as well as emphasis on, or avoidance of, social interaction.  In order to assess the health of the heart (and the element of fire), we must take into account that the health of the heart encompasses a spectrum.  On one end of the spectrum is the completely “snuffed” fire – the person feels as if they have lost their warmth, literally and metaphorically. Feelings of apathy and severe depression are often the result of deficient heart qi/yang.  A weakened fire can also manifest as social anxiety and a preference to remain isolated. Memory is poor and sleep is not restful. A person may present with a flushed face and have a difficult time staying still. Heart palpitations are common, and will often lead to high anxiety and/or panic attacks. 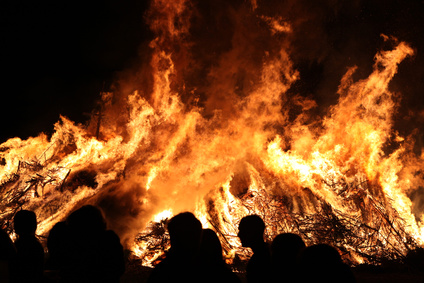 On the opposite end of the spectrum, excess fire can show up as extreme agitation, or mania (picture an uncontrolled bonfire). A person may speak fast or excessively. They may have a tendency to laugh inappropriately, or swing from one extreme emotion to another. Moderation can be difficult to maintain, and extreme consumption of food/substances and erratic behavior is common in this state of imbalance. A person with excess heat in the heart also has a hard time remaining still, but their movements are often erratic or forceful. Though the person might be noticeably uncomfortable, they may tend toward excessive optimism and uncomfortable laughter.

Again, remember that the health of the heart encompasses a spectrum. Perhaps you’ve never experienced either of the extremes – the bonfire or the dying flame. However, most people have struggled at some point in their life with their mind and their emotions (this includes everything from a diagnosed mental health issue to temporary periods of mental suffering). In fact, if you haven’t…well, I don’t believe you. We all struggle from time to time, and when our mind suffers, our heart suffers. That being said – the beauty of Chinese medicine acknowledges imbalance as a natural part of life, and is full of great suggestions on how to to regain balance.

See my post Maintain a Healthy Flame for suggestions on how to keep the fire element (and the heart) in balance, especially during those sweet, sweet months of summer.